​What should you expect when you stay at a three-star hotel? How does five stars in the UK compare with five stars in Europe? We help you navigate the confusing world of hotel star ratings.
​It all used to seem so simple. Two stars meant a breakfast buffet and clean set of towels. Five stars promised 24-hour room service, a swimming pool and a premium price to match. These days, it’s a bit more complicated. A two-star hotel might achieve a five-star traveller rating on TripAdvisor. A hotel with ‘three hearts’ from Thomas Cook might get four stars on Expedia. Super-luxurious getaways are even boasting six and seven-star accommodation. We take a look behind the stars to find out what you’re really getting for your money.
UK Hotel chains
Here in Britain, our rating system is fairly robust, comprising common standards, annual inspections and assessment across nine areas.  Stars are offered by the Automobile Association (AA), Visit Britain and its partner bodies Visit Scotland and Visit Wales. For full accreditation, hotels must annually undergo an overnight inspection and pay a fee of between £624 (for a one-star hotel) and £2,123 (for a five-star hotel). Since 2006, these bodies have shared Common Quality Standards, which means that they all award the same ratings to the same hotels. But what do the different ratings mean? 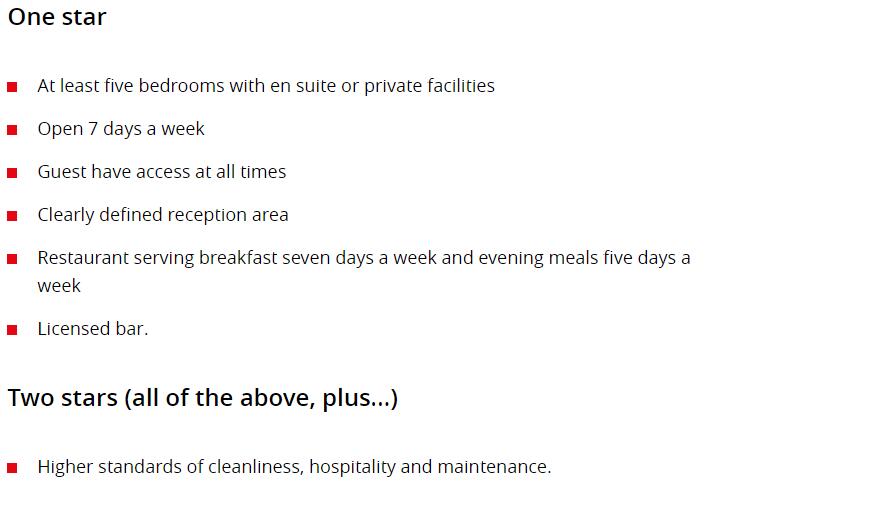 Since 2009, hotels in 17 European countries have adopted a harmonised ratings system called Hotelstars. You can see all of the countries signed up to the scheme on the Hotelstars website.

These standards broadly mirror the British system, with some differences. For example, three-star hotels are required to provide sewing and shoe polishing kits, laundry and ironing services; four-star hotels need to furnish their guests with a ‘bath robe and slippers on demand’.

To be able to hold five stars, hotels should offer personal care products in individual bottles, and a personalised greeting for each guest, with fresh flowers or a gift in the room.

Despite claiming to be an umbrella system across Europe, there are some notable absentees. France has its own ratings criteria based on the size of the hotel’s rooms and reception areas: double bedrooms, for instance, must be a minimum of nine square metres for a one-star hotel and 24 square metres for a five-star room.

The rules for Spanish hotel rooms are also linked to room sizes, but you get more space with a one-star double room in Spain than you do in France, with the smallest permitted size being 12 square metres.

The Italian scheme also varies considerably from the UK’s: one-star hotels need only have one bathroom for every three bedrooms, while breakfast isn’t required for hotels that are just one or two-star rated.

In the US, roughly 32,000 of the country’s 50,000 hotels are ranked using a system of diamonds, instead of stars, distributed by the American Automobile Association. No shortage of superlatives is to be found in the gradings’ slightly vague criteria: five-diamond hotels must offer their guests the ‘ultimate luxury’, and ‘meticulous personalised service’, while also bearing ‘extraordinary physical attributes’.
Booking sites

On Booking.com, for countries where there’s no official rating system, stars are ‘self-selected by properties during the sign-up process’. This means, in theory, that a hotel could award itself whatever rating it chose. Booking.com didn’t comment on whether it thought that this meant hotels were deliberately inflating their own ratings. Find out the companies you can trust with our best and worst hotel booking sites.

Because of these competing and ambiguous star systems, some hotels appear on the websites of different travel agents with different ratings. The only real difference between the two listings is the price.

We asked the six largest online and high street travel agents (according to our July 2017 member survey) how their own star rating systems work. Is your travel operator popular with customers? See where it ranked in our best and worst travel agents survey.

While Jet2 did not respond to our request, you can see the explanations from the others below. 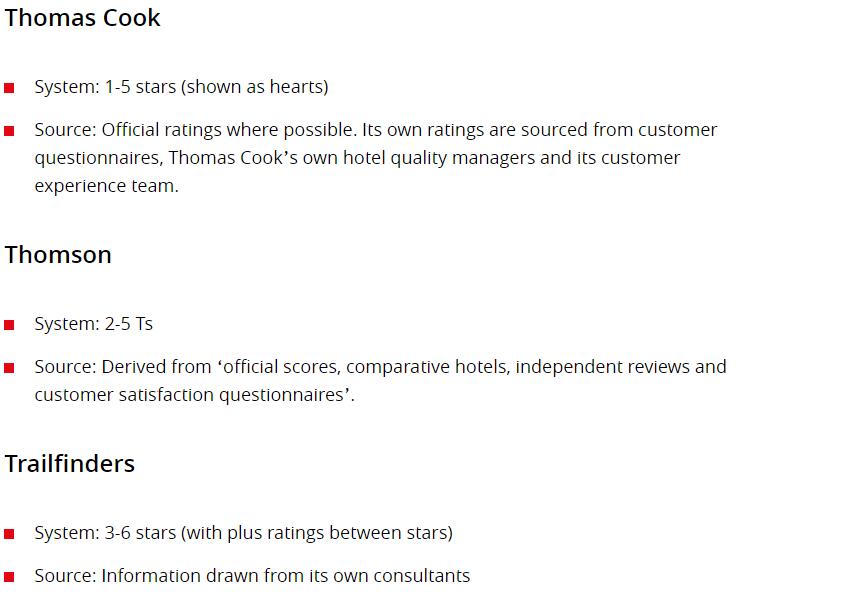