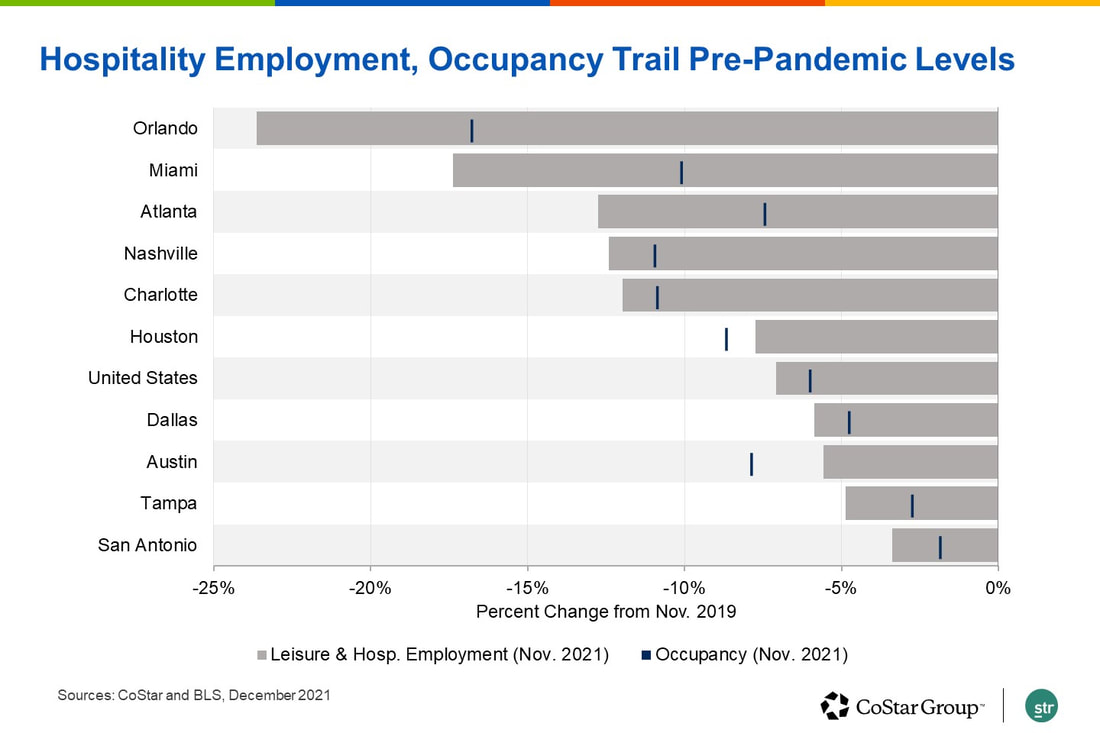 ​Employment in the leisure and hospitality sector remains below pre-pandemic levels in the largest Southern U.S. markets, according to preliminary Bureau of Labor Statistics data through November. In most markets, this sector continues to see the largest gap between current and pre-pandemic employment.

Much has been written about the difficulties related to staffing a hotel in recent months, but one could argue that lower hotel occupancy is one of the primary causes of the lagging employment trends in this sector.

Southern U.S. markets have seen the strongest rebound in hotel performance this year. The primary hotel performance metric is revenue per available room, or RevPAR, because it reflects both hotel occupancy and average daily rates. In a departure from national trends, RevPAR has been above pre-pandemic levels in the second half of 2021 in several leisure-driven markets such as Tampa and Miami, Florida and San Antonio, Texas. However, the strong RevPAR showing in these markets is primarily due to elevated hotel room rates. Hotel occupancy is still below pre-pandemic levels, and staffing decisions in the hospitality industry largely depend on the volume of visitors and guests to a destination rather than the cost of the room.

November leisure and hospitality employment in Orlando, Florida, is 24% lower than the same month in 2019, the slowest recovery among major southern markets. Hotel occupancy was 63% in November 2021, higher than the U.S. average of 58% but significantly below the 76% occupancy achieved in November 2019. Lagging occupancy in Orlando is due entirely to the slower recovery of groups such as conventions and conferences, a segment that accounted for over a third of hotel room demand prior to the pandemic.

On the other hand, the markets that have come close to pre-pandemic occupancy levels have also recovered more of their leisure and hospitality employment. As of November, San Antonio and Tampa are within two percentage points of November 2019 occupancy, and industry employment is within 5% of pre-pandemic levels.

In most southern markets, industry employment is down by more than occupancy. Austin, Texas, seems to be an outlier, with occupancy down by 8% but employment only down by 6%. The relatively strong employment in Austin may be due to increased staffing from the previous month, which experienced strong occupancy due to Formula One's Aramco U.S. Grand Prix.

Occupancy is expected to soften somewhat due to typical seasonal trends and concern about the delta and omicron variants of COVID-19. Therefore, leisure and hospitality employment is likely to remain soft in the first part of 2022.